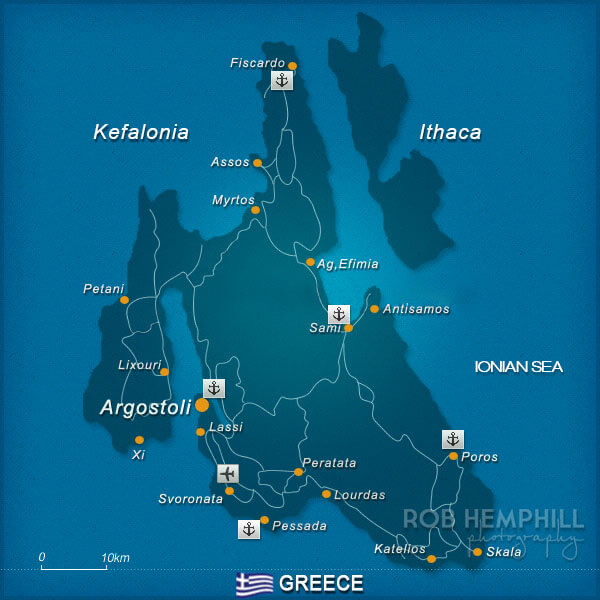 Villa Holidays on Kefalonia and Ithaca 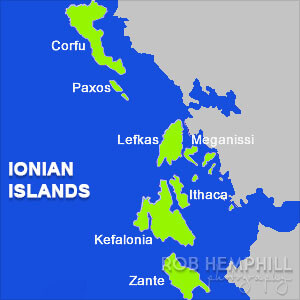 If you’ve never had any villa holidays on Kefalonia before, then you’ll be in for a treat should you take one.

Kefalonia, the largest of the seven Ionian Islands, is situated to the west of mainland Greece.

Lying only 2 miles off its northeastern coast is the much smaller, but highly significant island of mythology, Ithaca.

Having spent a special week in a villa near the northern fishing port of Fiskardo, it was wonderful to find a tourist destination that hadn’t been spoilt by the addition of high-rise hotels and fast-food eateries.

But, instead, the locals continued with their small boat fishing, as well as olive and goat farming. There was even some vine growing and winemaking.

Obviously, being a desirable holiday destination, it’s amazing that the landscape remains relatively unscarred. There are only small, simple and tastefully built villas sparsely populating panoramic mountains and seasides.

What I found on my travels was that villa holidays in Kefalonia are utterly magical and mythical!

Experience From a Previous Visit…

…meant we would return again and again!

It was in 2010 when we first had a villa holiday in Kefalonia (Cefalonia). We experienced the charm and beauty of this small Mediterranean island. There were photo opportunities everywhere.

From pretty beaches and attractive coves to peaceful villages, stunning scenery, and small fishing harbors, everywhere had a postcard view. The people are friendly and keep themselves to themselves. Most of the population make their living from agriculture and tourism in one way or another.

On this first visit, beaches were on the photo menu. Kefalonia has many stunning ones, so I set about trying to visit those that had been recommended to me by locals. 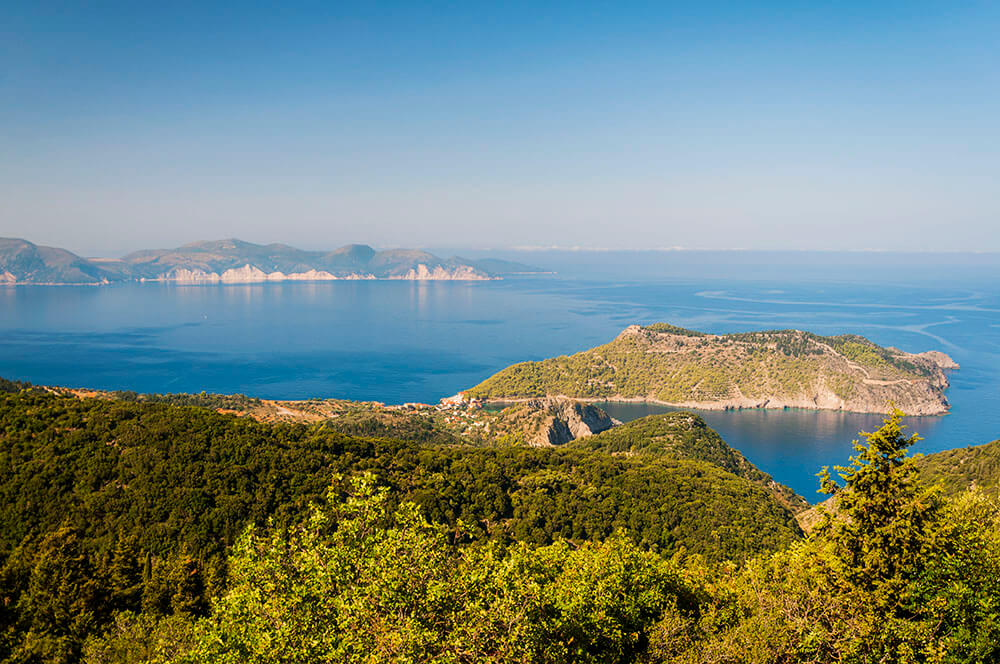 Assos – A village of wondrous beauty

Assos was founded under Venetian rule and from 1593 it acted as the administrative capital of the northern part of Kefalonia.

This small, secluded village is situated a few miles north of Myrtos beach on the Assos peninsular. The village is nestled into the horseshoe-shaped harbor and surrounded by dramatic coastal scenery of cypress forest hillsides and a cobalt blue sea.

The remains of an ancient Venetian fortress situated high up on the peninsular dominates the area. A well designed wide walkway allows the visitor to walk from the village up to the ruins, where spectacular aerial views can be experienced.

This rustic village has only about 100 inhabitants, which swells during the summer tourist months. Many people come to learn about the existence of Venetian architecture prior to the 1953 earthquake, as examples can be found in the national heritage fortress. 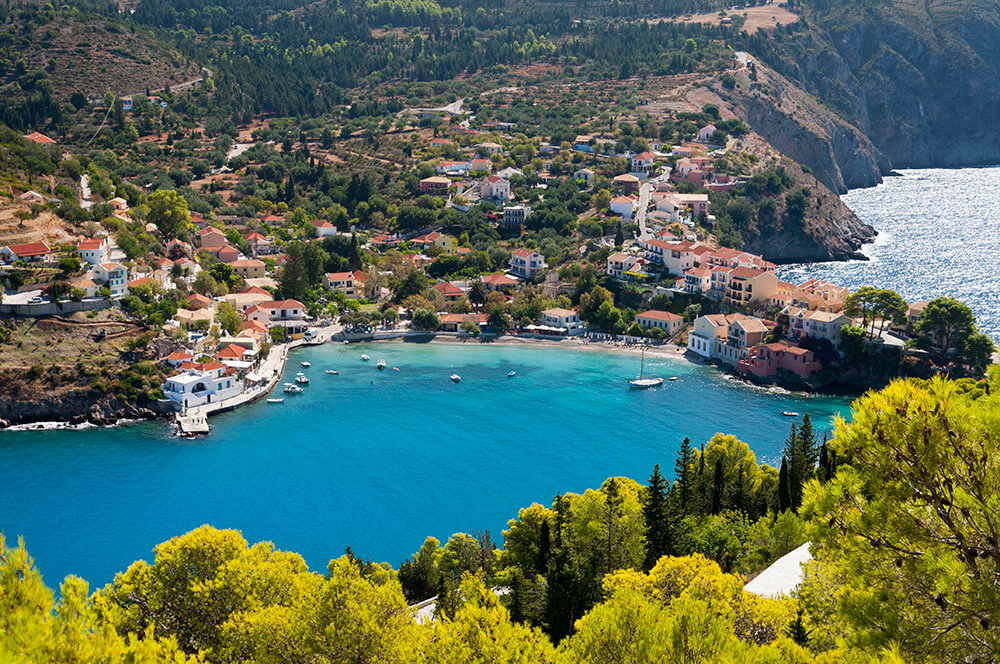 Looking down to the harbor from the walkway to the castle. (The castle is on the isthmus on the photo above this one)

The image below is of a tiny pebbled beach where visitors get the chance to cool off after the long climb to the castle. Who could resist looking at the color of the water? 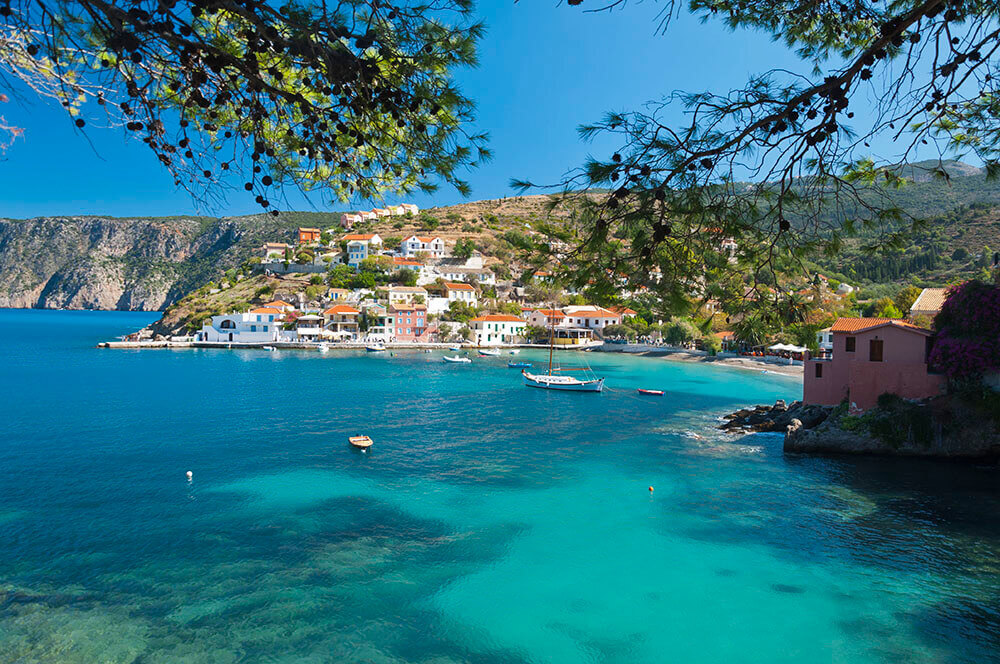 The terraced hillsides sloping above Assos used to be cultivated with cereal crops and grapes before the 1953 earthquake. However, these have long been abandoned, and now lie idle with perhaps the odd goat to be seen grazing among the undergrowth and olive trees.

Fresh fish is caught daily and appears on most menus in many of the tavernas. However, the fishing fleets around the island have now diminished in size. Tourism is by far the most important form of revenue with the majority of Kefalonians being employed in related industries. 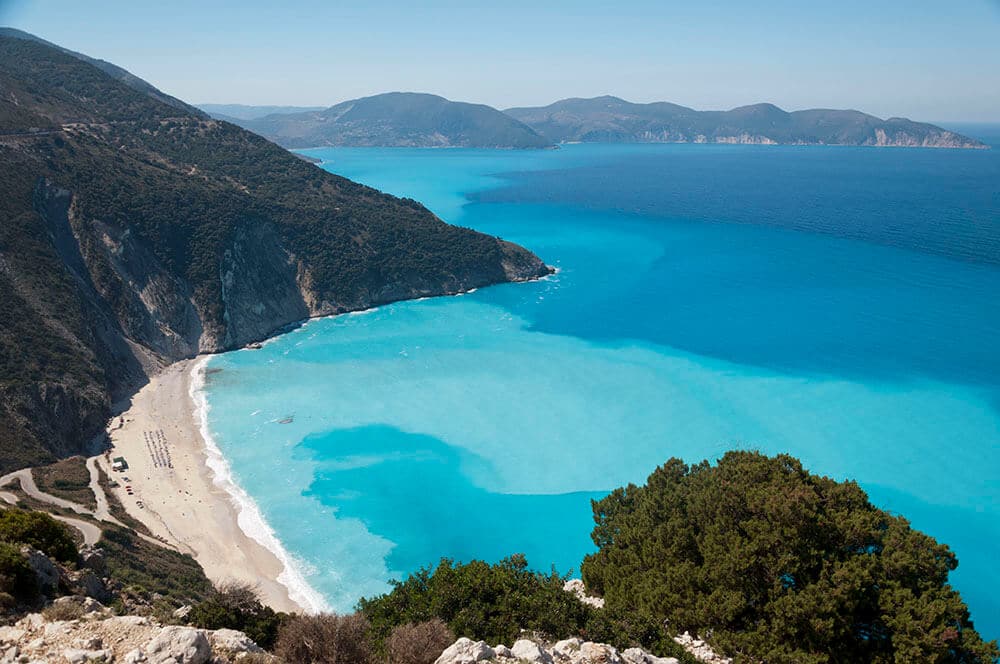 One of the most photographed beaches in the world.

Myrtos beach is located about 30 km north of the capital, Argostoli, on the northwestern coastline near to the ancient and beautiful town of Assos.

High rocky white cliffs surround the crescent-shaped beach. There is a small cave at its southern end, while the beach is pebbly and difficult to walk on. There are deep shelves of sand and stone, so one must enter and leave the water with caution, due to the strong undercurrents.

Walking on the hot pebbles is not easy in bare feet, so sensible footwear is advisable for swimming in.

The many colors of blue, from the sky down through the water, have one in awe when viewing from this spot. The surrounding area is rugged and unspoiled. In fact, only when one is swimming in the sea and facing away from the land, can a magnificent purple haze be seen stretching right across the horizon. 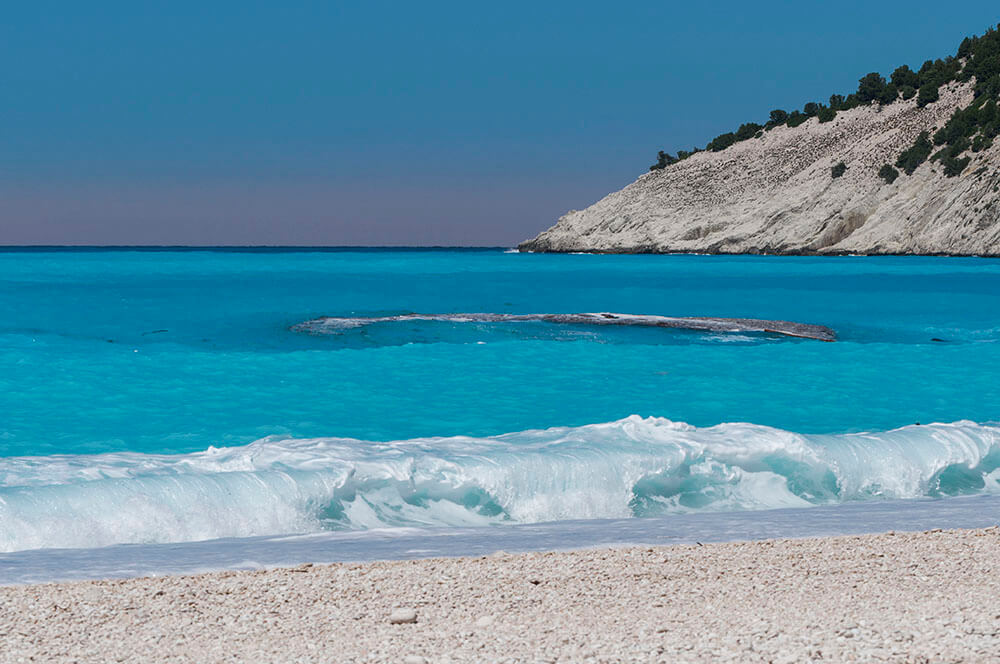 The location is probably best known for a beach scene in the film Captain Corelli’s Mandolin filmed on the island in 2001.

Nicolas Cage, Penelope Cruz, John Hurt and Christian Bale star in this light-hearted film set in Kefalonia, based on the novel by Louis de Bernieres.

Corelli’s passion for playing the mandolin and singing with his battery of musical troops have the gentle effect of softening the head-strong Pelagia, whose fiance Mandras, (Christian Bale) heads off to war on the mainland. 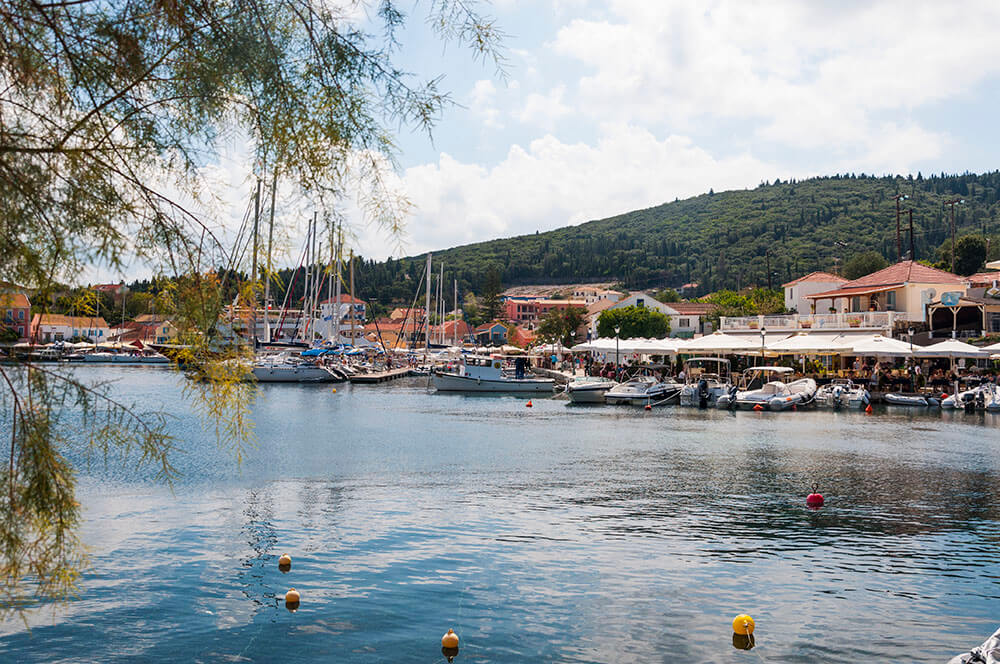 The town of Fiskardo is situated on the northernmost part of the island. As a port, there are regular ferries to neighboring Lefkada (Lefkas) and Ithaca, as well as to mainland Greece itself. The coast around Fiskardo is predominantly rocky with several pebble-beached inlets and coves.

Fiscardo is unique as it was one of the only places on Kefalonia that was left virtually undamaged during the great earthquake of 1953, which ruined most of the historic buildings on the island.

The town takes on a very different perspective at night as the lights from the old buildings, bars, and restaurants combine to provide that magical Mediterranean atmosphere. Of all the villages on Kefalonia, Fiscardo has a unique ambiance, especially on a summer evening drinking wine in a taverna to the sounds of the gentle lapping of the sea. 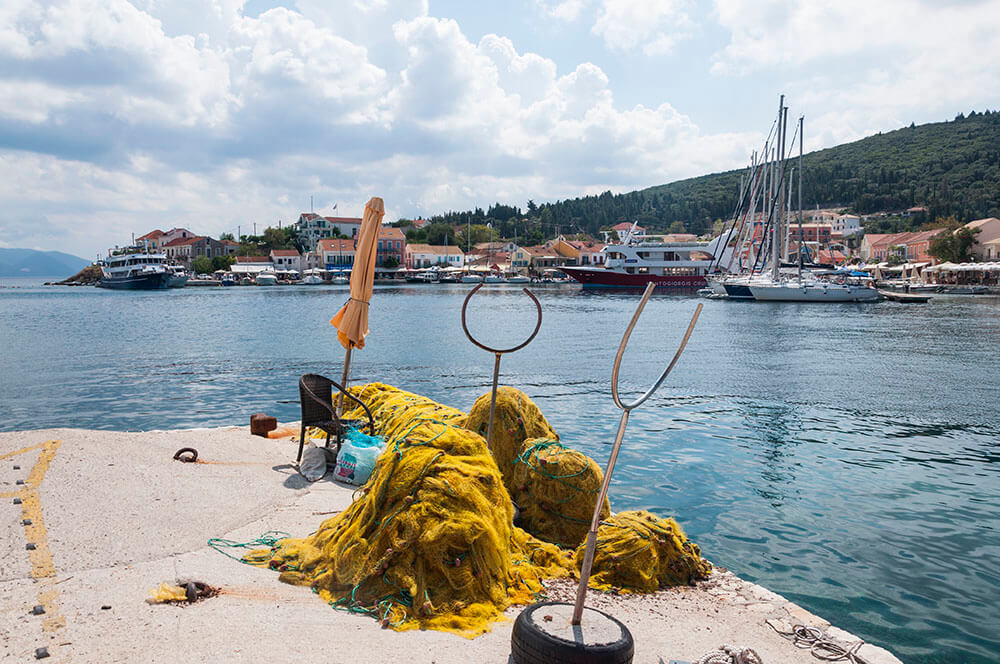 Journey To Our Perfect Villa 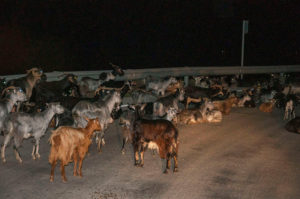 Having arrived at the airport in the dark, we didn’t know exactly where our villa was. We knew we had a 50-kilometer drive along narrow, twisty roads to get to the village. However, we had no idea which landmarks we were passing.

We encountered a small group of goats lying in the middle of the road. They were obviously enjoying the radiated warmth from the tarmac after a lovely blue-skied, hot day. And clearly knew that the traffic – all one car of it – would stop in time. In fact, they were very belligerent at having to move at all!

When we arrived at our destination, we had discovered a dream villa. The owner immediately made us feel very welcome. But, we still had no idea what views we might have – or even if we had one at all!

In a sleepy, ancient little village 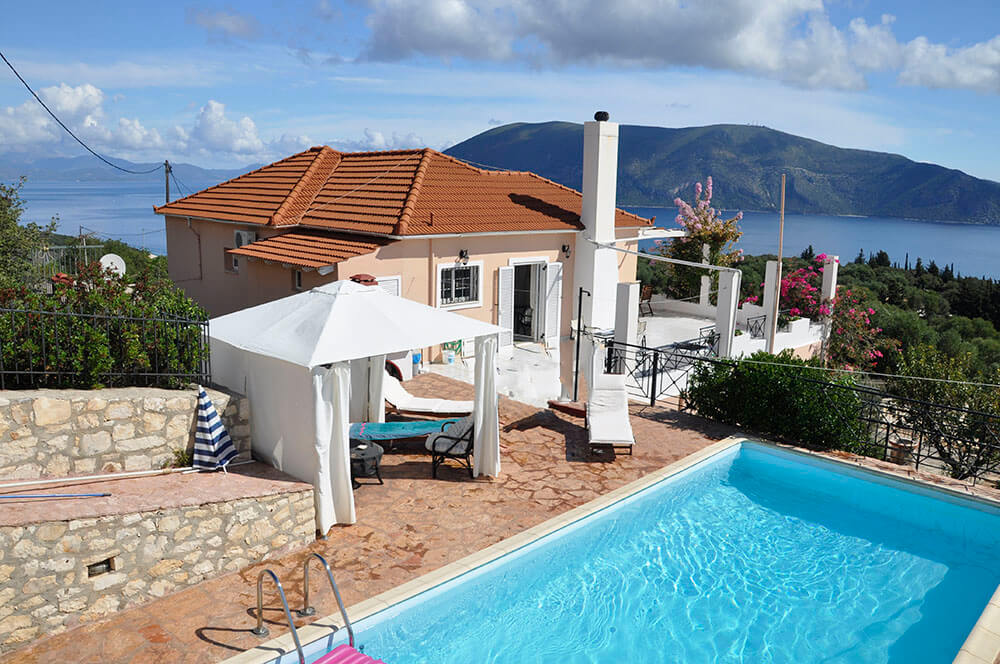 This was our villa facing towards the island of Lefkada (Lefkas) to the north and Ithaca to the east (see photo below). To wake up and have the sun blazing through the window with the amazing backdrop of Ithaca seemed so surreal. We were only 2 miles from this famous island of mythology.

We soon started talking about the stories of Homer’s Odyssey. What did Cyclops and Zeus, Athena and Penelope, and Odysseus get up to? Who were the Phaeacians? The chatting then slowed down, as we all struggled to remember the mythical details. Have a look at Odysseus. But we still couldn’t believe that we were a stone’s throw from this great island. We had to visit it by boat – and we did the very next day. 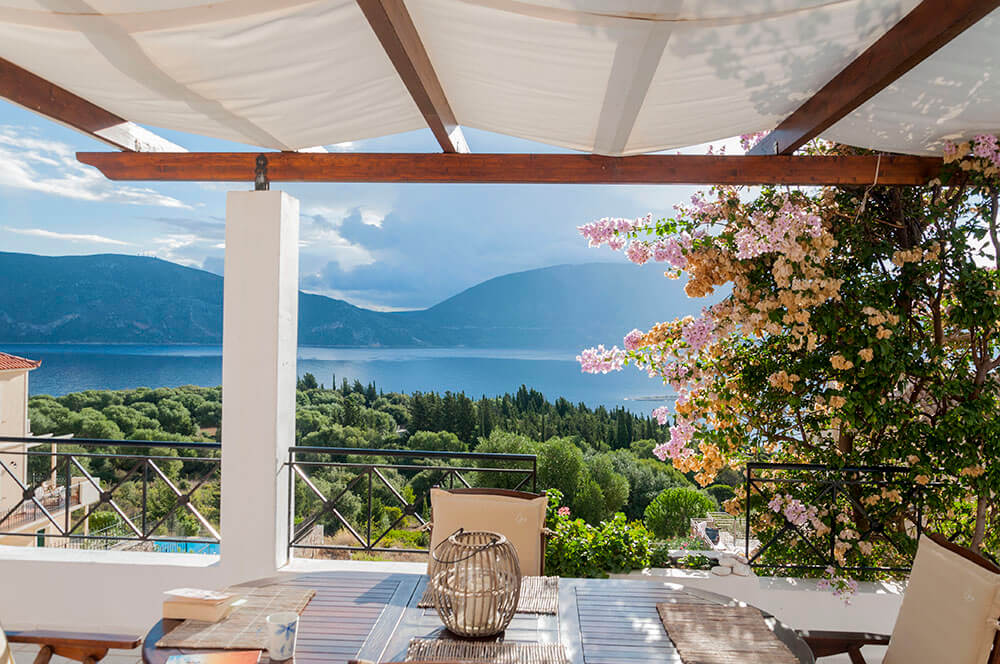 Our pretty location meant that we had access to so many gorgeous beaches, harbors, and villages. We found a wealth of attractive restaurants with tables only 3 feet from the sea all close to our villa. This was somewhere truly wonderful!

Greece is beautiful and has a lot to offer. I can highly recommend any villa holidays to Kefalonia or other neighboring islands.


Have you been on any villa holidays on Kefalonia or any other Greek island? If so, then do share your exploits and experiences. Thanks for dropping by and I hope you enjoyed the photos.